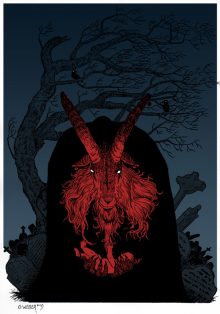 Owen William Weber is a professional illustrator, working in both oil on masonite and pen and ink on paper. His work has been included in such annuals as Spectrum, The Society of Illustrators, Illustration West, Infected By Art, and the Art Renewal Center’s International ARC Salon Competition Catalogue. His clients include Fantasy Flight Games, Upper Deck, fantasy author Levi Stack, Michael Publishing, Eloquent Books, and Sw!pe Magazine. You can find more of Owen’s work on his website: www.oweber.com and on his Etsy page, RagnarokShop.

Stefan Koidl is a self-taught illustrator living in Salzburg, Austria. He loves to draw images that tell a story and to trigger a certain feeling in the observer, to make them think. He likes to paint creepy and dark stuff, as it’s thrilling to “play” with the viewer’s fears.