I lived with an emptiness that was filled by my cat.

It’s easy to be a lonely person. We work too hard, we strive for a sliver of dignity, and to keep a roof over our heads. We isolate ourselves from everyone we know, and even the smallest of conversations can be too tiresome after a day spent having profanity thrown at you while people call you a scammer—or worse—because they can’t manage to use their phone lines. So the cat is all that’s left.

Mine had been found inside a box, like so many abandoned kittens are. Nothing out of the ordinary. I supposed there had been more cats inside that box at one point, because it’s hard to conceive a litter with few babies; but there were only two. I imagined the others must have been taken by the waters—rain was pouring like I’d never seen before. The box was buried under garbage bags, which almost covered it entirely.

It was the ginger tail, so vibrant against the grey of the sidewalk, that caught my attention. I took the two survivors home.

As small as they were, all I had to do was to fit them inside my coat, where they’d be warmer and drier than they had ever been in their short lives.

One of the kittens was too weak and didn’t make it, which made the remaining one fussy. He slept by my side every night, nestled against my arm, making it impossible for me to go to the bathroom and pee.

I saved the cat from the streets, but I saved him from very little. He would spend the whole day entertained by paper balls, elastics, and pieces of wood I found in the garbage. My wooden chair was soon enough covered with scratch marks, and I left that too to the cat, buying myself a cheap plastic chair.

Many times it occurred to me how he could be so happy, confined to such a tight space. My house was no more than a corridor plagued by the smell of frying oil that stuck to everything, and the only window I had stood by the side of my bed. It had enough space for a small table, where the TV was, and my plastic chair—everything bought from a thrift store.

I don’t know how the cat spent his days, but whenever I got home, no matter if I had to work the extra shift, he greeted me with the same enthusiasm: stretching his long, fuzzy body, rubbing against my legs . . . even if my clothes were drenched because of the rain.

There’s a particular satisfaction when one finds something that breaks the old and same routine; and I found the cat, and he had me break away from my apathy. I must imagine my coworkers saw the change in me—my true eagerness to go back home, instead of the exhaustion and desperation of usual. They certainly heard my questions about pet screens and anti-mold wall paints. Now I wasn’t simply living somewhere; it wasn’t merely the place I was sleeping in. It’s where I was building a home, as small as it might have been.

We ate poorly, most of the time. I got used to sharing half of my burger with the cat, keeping for myself the fries drenched in spicy mayonnaise. It was too cute to watch: the cat licking his paws after eating, I mean. He’d lick the bottom first, the little toe beans, and then he’d rub the paws all over his face. At that, I’d give him another little piece of meat, so he’d nibble at my hand and lick the grease from my fingers with his rough little tongue—only so I could see him cleaning his toe beans again.

During the weekends, our day-to-day was different. I’d sleep away all the time that waiting for buses and that my job took from me. I’d wake up only when the cat commanded me to do so, so I could take his smelly poop from the litter box and put fresh food in his bowl. The cat would meow in suffering, crying at my ear until I was up. That’s when I’d pee, take a bath, eat cream crackers with margarine, just so I could trick my stomach. I’d feel too lazy to cook or prepare anything else on days I could simply lay down under the warmth of my duvet, the purring of the cat keeping up with my breathing.

It’s hard getting closer to people when your job consumes your life.

After a day spent at the phone, talking to people who’ll answer you with varying levels of aggressiveness, you need a time to enjoy solitude. My co-workers would finish their shifts as tired as I was, running home to their chores, to get as much sleep as they could. And after the cat showed up—well, the cat satisfied all my needs for a company. He was happy with whatever I could give him; and he didn’t expect me to stop cleaning the house just so we could have a nice conversation. He was a silent friend, who made me laugh whenever he’d get caught in the dirty sheets on the floor.

But then, one Saturday, he found himself alone. His crying didn’t wake me up.

The cat got desperate, but he wasn’t that smart, and the apartment’s only window had been already screened.

He pulled the hem of my pajamas and rubbed against my skin until he found my chest—pulling the hem up and up, until he could curl up on the curve of my recoiled belly. He started to nip at me, trying to force me to wake up. He’d purr, walking over my chest, agitated over my silence. There was no movement that indicated to the cat my awareness; no diaphragm move that would make him slip into my arms and hiss in discontent. No sign that I might cuddle with him in answer to his calls, changing my position, just so I could better adjust my body.

He gave up on trying to rouse me for a while, to use his litter box and drink water from the bottom of an iced-cream plastic container, and then came back and licked me, as he did every morning. So anguished the cat was, he started again to nip at the tip of my fingers, looking for motherly comfort. He’d bite my index finger; my middle finger; my little finger; until he’d get distracted and fall asleep. He slept on my chest, waiting to feel any movement, as faint as it might be.

Eventually, the cat tried a new way of getting my attention: scratching my ribs, biting and rubbing his head on me; arranging himself on my belly; starting again whenever he’d slip on the old mattress. Usually, bites like that wouldn’t make any difference—but the insistence of his claws over my thin skin, less resilient than before, created a small wound.

Who could blame the cat? He’d spend his day without food, and the taste of fat and blood grew as he scratched and pulled with his teeth. It must have reminded him of the little pieces of bacon I’d given him sometimes; rubbery and fatty; or the juice of chicken’s liver, mixed with rice.

Not wanting to be away from me, he’d always come back to my belly. Rub his head on my hands, nipping my fingers again and again, the little comfort I could give him. He slept with his head close to my legs.

The next day, I noticed him walking around the empty food bowl, greasy from the last meal I’d ever served him. Soon enough, it would attract flies, grow moldy, and the whole apartment would then stink. I felt pity for the cat—really. I wish I could have taken better care of him.

Very rarely he left my side, waking up to use the litter box, looking for the toys that now remained forgotten, no one to play with him. He rubbed against my arm, looking for distraction. He laid down, his belly up, and then quickly gave up on that particular position, when he noticed I wouldn’t even stir.

Meanwhile, the loose flesh from my open wound entertained him. He was bored, my poor cat.

Lonely, wishing for a caress.

That piece of flesh got looser with the passing of another day. The cat would sit on my sunken belly and play with it, his claws grabbing and pulling.

He enjoyed that, watching the flesh rip, and the tasty reward he’d get—which made him love me even more. He’d purr with pleasure at each bite.

He must have eaten a lot, compensating for all the days filled with meagerness. Days in each we shared every little bit of food.

From that first wound, the cat found flesh that satisfied him better. I believe it was the spongy texture of it, the moisture, that made it pleasant to bite—because he didn’t hesitate. His weight over me, he enlarged the wound, ripping more and more flesh. He’d purr in joy as he devoured my body, a piece at time, now easier to swallow than those initial bits of skin, feasting on the juices.

For a moment, I wondered if he’d be sick. I worried that no one would be there to take care of him.

All we had was each other, after all.

But his loud satisfaction convinced me that he deserved that banquet; the one my body could give; the only one I’d provided him during all the time we had together. As long as my decomposing body didn’t attract unwanted attention, my cat would be living a life of uncertainty. And while I was there, I’d do anything for him. I’d let him feast on me until he grew tired.

The following Monday was the first time I ignored the alarm clock, my cellphone, and kept still, stealing time, so my cat would stay longer with me. The first time I didn’t wake up in a sudden manner, my cellphone vibrating, running to work even before the sun was out.

What we had right now wasn’t perfect, but to finally rest, with my cat by my side, was a relief. We’d always managed to make the best out of the worst situations.

As the cat ate, he started to fit inside my chest, cuddling between my bones, my cartilage, my motionless heart. His stomach probably full, he slept. His pleased sounds, his purring, they became the beating of my heart, the sound of the air leaving my lungs.

Morana Violeta is a cat lady, country goth, and chinese-fantasy fangirl who loves romance, ghost stories, and her nine pets. She’s also in charge of social media at Eita! Magazine and has recently published in Portuguese a surrealistic story about dangerous floods, and the giant capybaras that come with them, over at Revista Mafagafo.

Clara Madrigano is an author of speculative fiction. She publishes both in Portuguese and in English, and you can find her fiction in Clarkesworld, The Dark, and soon, too, in Nightmare. She’s a Clarion West alumna and her stories have been featured in the Locus Recommended Reading List. She can be found at claramadrigano.com. 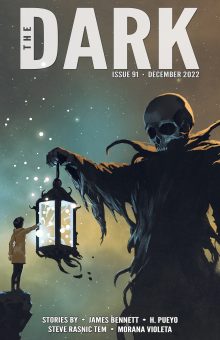