The Summer Is Ended and We Are Not Saved

It’s the end of summer, the evenings only just starting to turn cold. He doesn’t join me for tea again today, so I spend my time beading by the window, stringing bead after bead after bead, my eyes straining against the failing light, the tips of my fingers raw. Cook finishes her chores and joins me. She sorts my beads by colour into tiny cups. She says nothing of the bruise that has bloomed around my lips, and I am grateful.

Hours later, after the sun has set, we see him riding his horse up to the house, his shoulders wide as a mountain range, his long beard gathered in a braid beneath his chin. Cook disappears into the kitchen, mumbling something about meat that needs to be cured.

I leave my beadwork and meet him by the door, like a wife, like this is my house. He’s brought me cherries, he says, a whole basket of them, firm and shockingly red. I take two and put them both in my mouth and chew, without a word.

Then the harvest moon comes so we walk down to the village for the feast, and the people gawk at us, the lady and her gentle man.

The men who helped move us into the house a few months ago nod at him like old friends. They carried his furniture and his paintings and the many boxes full of the dresses he had made for me and for the ones before me, amassed over the years, hundreds of them. Last, the men carried the long wooden chests into the little back room where my man hangs his secrets out to dry. What do you have in there, corpses, the men joked and laughed, gasping under all that weight, but not waiting for a response.

He spent the day with those men, him sweating in his finery, them pretending he’s one of them and failing, falling back on that distant deference that wealth wedges between people like him—us—and everyone else.

But, tonight, we’re all friends. We dance together, and then he dances with the village women and I dance with the village men, and then we dance together again. When the lutist tires and music runs out he defies social norms and leans so close to me I can smell the wine on his breath. He smiles and hugs me in front of everyone, the way a bear embraces his victim—if you don’t look closely, you might mistake it for love.

Later, when we get back, his eyes are full of clouds. You flinched, he says, you embarrassed me. His lips quiver. Are you sick of me, then?

I touch his knee and reach for his beard in placation, and I wonder how long it’ll take this time, how long it will be before the crops start dying, before the livestock slowly stop breeding, their young first coming out of wombs deformed—a human mouth on a foal, eggs filled with ashes, a lamb born weighing much more than it should, cut open to reveal a heart made of stone. It doesn’t happen all at once, of course, it takes years, long enough that people don’t suspect us, or they do suspect us, but only when it’s already too late, and when they come to our door with torches or crosses or long, thin muskets they find only empty rooms and curtains rotting on the windows like shrouds.

Never, I say. Never ever.

And then, his fury thwarted, my gentle man bleeds. His blood wells up from the pores of his skin, unprompted, smelling of soil, and I wipe it away with a clean white towel that I will later throw into the trash.

My love, I say and kiss.

Then the winter is here and then the winter is gone and spring comes and then summer, and I think my turn is coming, maybe not this year and maybe not the next, and maybe not this house and maybe not the next, but one house with another little back room, one day. And yet he’s tender, takes me walking through the woods, gifts Cook with a cartful of expensive cheese and cured meats for her own home, and this valley, this new valley stays green and fruitful for another year. My stomach flutters with expectation—what if we get to stay here forever, I think, what if he’s changed? What if this house is the house that I can finally call mine?

In spring, he asks young village girls to the house, and they come willingly, faithfully, dazzled by the gold plating that conceals the decaying wood of the mirror frames, the fine lace that veils the old furniture. They babble about wanting to see the entire place, every room, every nook, every secret garden, their cheeks rouged and excited.

I release Cook to her home in the village and she goes, thankful for the chance to see her children and her children’s children, perhaps glad to be away from the little back room we told her she’s never to go into. She only affords the village girls a single glance of pity before she walks out the door. I do my best to make them comfortable, seat them in the drawing room, give them sweets, have them talk about the games they like to play with each other when they’re done with their chores, and then they leave, slightly sadder and with a sense that they’ve lost something they can never get back. None of them ask to see the rest of the house after all.

I remember when I was one of these girls myself, many summers ago. The mistress gave me sour cherries that stained my lips for days. When she went away, months later, I didn’t question her disappearance, and I didn’t question his showing up at my mother’s door with a basket of sweet bread and good wine either.

I pass the winter stringing beads by the window, my treasures stored neatly in trays and boxes arranged on the table next to me.

The day his horse dies he comes home storming, and I let my beadwork fall to the floor to catch him, contain him before it’s too late, trying not to think of the women hanging on the walls in the back room of this house that is not mine. He allows himself to be held for a moment, but then he’s too much for my embrace, my words too small and his wrath too large. He pushes me away, the room filling with the smell of wet soil, and I think that’s it, I’m gone, this house is gone, this village is gone, but all he does is upend the table with my beads on it. They rain down on the floor and scatter, fill the cracks between the wooden boards.

He pauses for a few breaths, stares at the beads sadly, tries to say something, says nothing. He flees.

Cook shakes her head in disapproval, but she still bends down to help me collect and sort the beads. We retrieve what we can from beneath the floor boards, abandon what cannot be salvaged, our knees bruised from pressing against the beads, our eyes stinging.

He comes back hours later, tells us to get off our knees and stand in the corner by the curio cabinet, and we obey. He takes the boxes and trays we spent all day refilling and empties them on the floor again, one by one, all our work squandered. Then, he kneels and starts collecting the beads in his giant palms, sorting them by colour with his thick fingers, carefully, holding his breath, as if handling tiny living things.

What is he doing? Cook whispers to me.

Then the crops start failing, the corn growing rotten at first, then not growing at all, the horses trembling and running as if stung by some passing terror, then falling and never getting up again. The girls waste into a sadness, seek each other’s lips for comfort, openly now, their mourning as baffling to them as to everyone; a mysterious disease, the villagers say, passed mouth to mouth. They point at the house and speak in hushed voices, spit in their shirts when they pass by our front gate.

Cook quits the day I walk into our bedroom and find it strewn with leaves, brown and crumbling to nothing, and I know we’ll soon uproot ourselves once more, find some other place where no one knows us and rumors have not yet spread, start all over again.

They come for us when the next summer is ended, the harvest done and their storerooms empty of grain, their sheep dead in the fields, bloated, feet stuck in the air. But we’re already in the wind, moving on, moving away, our boxes stacked again, our chests heavier.

We ride on his young horse. I hide my face in his hair, breathe in his earthy scent, reach around his chest to touch his beard. His heart beats fast.

Never, I answer. Never ever. 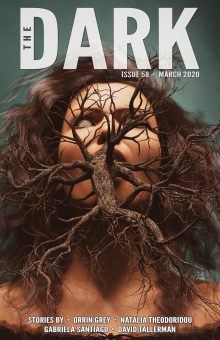