(Germantown, Maryland) — September 26, 2016 — The Dark Magazine has hired Silvia Moreno-Garcia as co-editor alongside current editor Sean Wallace. Moreno-Garcia will assume her responsibilities effective October 1 and her first issues will start next January.

Mexican by birth, Canadian by inclination, Silvia’s debut novel, Signal to Noise, about music, magic and Mexico City, was listed as one of the best novels of the year at io9, Buzzfeed and many other places and nominated for the British Fantasy, Locus, Sunburst and Aurora awards. She was nominated for a World Fantasy Award for her work on the anthology She Walks in Shadows and is the guest-editor for Nightmare Magazine’s POC Destroy Horror. She edits The Jewish Mexican Literary Review together with award-winning author Lavie Tidhar. Her website can be found at www.silviamoreno-garcia.com

“Silvia has always impressed me with her editorial acumen and acquisitions, both with her own anthologies and Innsmouth Magazine, and it is to our credit that we have her onboard going forward,” said Sean Wallace, co-editor and publisher of The Dark Magazine.

The Dark Magazine is published by Prime Books, an independent publishing house specializing in a mix of literary/commercial anthologies, collections, novels, and previously two other magazines: Fantasy Magazine and Lightspeed Magazine. 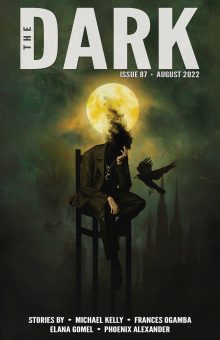