“You again? You don’t understand ‘no,’ is it? Why you keep coming here?” Mrs. Ong growls, fists propped on generous hips, lipsticked mouth a crimson wound. “Also, what you want me to do with those?”

“Put them in a vase?” The man is narrow as a joss stick, with thinning hair and a grave stare. He proffers a bouquet the color of raincoats and warning, tawdry in its phosphorescent vastness. “These are your favorites, aren’t they? Lilies, roses, sun—”

Mrs. Ong bares her teeth. “How you—forget it. Keep them for yourself. My children all got allergies.”

“But what la! Who you think you are? You think just because you make beautiful my darling’s corpse, you can come here and kau his wife? I told you once. I tell you ten times. Not interested!”

She slams the door before the mortician can reply.

He sighs, a quiet noise of surrender, its potency long eroded by repetition. The man looks up and cocks his head as though in anticipation.

Above, the evening sky is bruise-black, a dead man’s colors. It cracks apart with a hiss and rain descends. The man does not move. It is only when the storm has soaked into his bones that he nods to himself, finally satiated, and walks away, a blot of ink dispersing into the slaughter of rush-hour traffic.

Mrs. Ong invites the mortician inside after his thirty-eighth visit, her resistance finally worn down by bribes of fresh produce. Grumbling, she shepherds him through the mansion, the silence like the weight of caskets.

The mortician scans his surroundings. The house is a museum of faded keepsakes, its walls infested with dust-smeared photographs. In a desolate alcove, last week’s bouquet sits wilting, its petals already insect-gnawed.

The kitchen is better kept than the adjacent spaces, although the corpse-white glow of the overhead lighting does little invite comfort.

“Tea.” The mortician hesitates, coiling atop a plastic stool. “If it isn’t too much trouble.”

Mrs. Ong grunts. “I say Milo or coffee, you say tea. Then, you ask if got trouble. Stupid, ah?”

His smile tautens. “I apologize, Mrs. Ong. It’s just that I—”

“You want to stay slim. I understand la.”

“You’re lucky, you know? “ Mrs. Ong declares airily, even as she excavates cupboards and drawers. “My darling really like to drink tea. Cheap tea, expensive tea. He buy all kind. Very addict.”

“Stupid man. Think he so rich. Spend, spend, spend. Flowers la, staycations la, expensive dinners la. We go everywhere, but for what? Now, his funeral so cheap. No class.” Her voice hitches, hinting of something poignant.

“I think—” The mortician says, the cadence of his words steady as a funeral march. “—that he might have felt that it was more important to make you happy.”

Mrs. Ong slams a kettle on the stove, features convulsing into a snarl. “Happy? Make me happy? You think I was happy explaining why his coffin so small, why the dinner so simple? All our relatives. Aiya, they look down on us la.”

Her lips pinch close. “His funeral should have been grander. Last time his family see him on earth what. Stupid.”

The mortician says nothing.

“Ya.” She nods, as she plucks teabags from an elaborately decorated box, the indigo surface swallowed in gaudy golden curlicues. “What you want from me? I got no fortune for you to steal.”

“I—” The mortician hesitates, gaze flitting above the horizon of her shoulder. “I only want you to be happy, Mrs. Ong. It’s been more than a year. It is time to move on. I also believe that we could be good for one another.”

“How?” A derisive snort. “You give me discount for my funeral next, is it?”

“No. Although, I suppose that could be arranged.” Undeterred by her vitriol, the mortician continues. His calm is the hush that follows disaster, the width between epiphany and despair. “Mrs. Ong, you’re a mountain in a country of sand. You raised five children. Buried two. You held vigil at your husband’s deathbed for a week, never leaving his side. Your strength is incomparable.”

He breathes out, eyes bright and strange. “Any man would be fortunate to call you his own.”

Mrs. Ong decants boiling water into a pair of earthen brown cups before flattening palms on the kitchen top. Tension knits the lines of her shoulders into hard shapes, her mouth into a fist.

“I know Christian people say ’till death do you part,’ but I believe in Chinese tradition. Love is a red string that tie husband and wife together. Won’t break even if one person die. I—”

Mrs. Ong smiles, all the fight exhausted from her round face. “You’re very kind, but we cannot couple la. Lonely or not, I must be kuai and stay loyal to my husband. Otherwise, how to explain when I see him again?”

The mortician says nothing at first. Instead, he tips his head again, expression attentive. Heartbeats pass before the mortician finally nods. “I understand. And . . . I’m sorry.”

He leaves before Mrs. Ong can ask him why.

“I tried. “ The mortician splays his hands. “But I doubt your wife will ever let you go.”

Mr. Ong’s ghost is an incandescent smear the color of bones, bright as the afterimage of headlights. He shrugs good-naturedly and motions with a hand, as though to absolve the mortician of life’s unpredictability. A smile escapes and then Mr. Ong is gone, dragged back through the door, his fingers clawing at a noose made of red string.

Originally published in Fantastic Stories of the Imagination, Issue 226, March 2015.

Cassandra Khaw writes horror, press releases, video games, articles about video games, and tabletop RPGs. These are not necessarily unrelated items. Her work can be found in professional short story magazines such as Clarkesworld, Fireside Fiction, Uncanny, and Shimmer. Cassandra’s first original novella, Hammers on Bone, came out in October 2016 from Tor.com. To her mild surprise, people seem to enjoy it. She occasionally spends time in a Muay Thai gym punching people and pads. 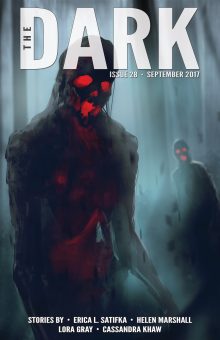