Delayna snapped the first crow’s neck without thinking about it. She had learned this from her parents. Before they robbed and prostituted their way out of her life and into prison, they had taught her to ignore the weight of sin and instead focus on doing what needed to be done to get by. Their lessons, though masterful, hadn’t completely taken. The weight of what she had done in the past had been too much for her. This though, this dead bird in her hand, it didn’t weigh much at all.

Reaching out from behind the camera, the director snatched the black-feathered corpse from Delayna and flung it onto the concrete floor of the Burbank warehouse. “One down, nine-hundred and ninety-nine to go,” he said.

The director’s aged hands did constant battle with the white hair that stuck to his ever-shiny forehead. Watching the old man made Delayna feel inadequate about her lack of primping. She combed her short blonde shocks in the morning and let them do whatever they wanted during the day—no tending. By nighttime, they stuck out at odd angles like straw from holes in a worn-out scarecrow.

She had made contact with the director via a website where she often found video work. The work was dicey, but far from the path her parents had taken. Mostly on the right side of the law or only a couple steps over. She didn’t have the looks for traditional porn—chin too wide, forehead too short—but she had the guts for the out-there stuff, the whips-and-chains stuff, the oozes-and-eels stuff. This was a first though.

Upon meeting the director, her first question had been, “Won’t the crows fly away?” The old man had laughed and explained the assembly line setup: one man would take a crow from the massive cage and hand it to the anesthetist, who would inject it and hold it tight until the drugs kicked in. The anesthetist would then give it to the director, who would turn it over to Delayna.

Now, the assembly line shifted into gear. Another crow appeared in Delayna’s hands. Alive, but barely. It had been injected with enough tranquilizers to prevent it from flying away, but not enough to stop it from desperately flapping its wings and chomping its beak.

When she snapped the crow’s neck, she didn’t just hear it. She felt it. It echoed through her wrist, where, one late night when she had strayed too far in the direction of her parents, a man had shattered her bone with a baseball bat in Hollywood, before tearing off her fishnets and stuffing them into his mouth until he gagged. She held the now motionless bird for a moment as the feeling faded.

The director hissed, “Throw it in the fucking pile.”

Delayna nodded and did as ordered. Haste was for the best. If she spent too much time with each bird, this would take too long. She would likely be snapping crows’ necks all night as it was. There were worse places she could be.

A third bird fell into her hands. She looked down to see her fingers shaking. That was unfortunate. Was she nervous? Upset? She really thought she could do this. No, she hadn’t even thought about it. She had simply agreed to it, as she often did, knowing it was just a thing she needed to do to get by, and far from the worst. She hadn’t killed animals before though. Not with her bare hands at least.

Still, these were crows she was exterminating. The world had enough of them. No more than insects really. Dirty, roadkill suckers, cawing belligerently and shitting all over. She shouldn’t have looked at this third one so closely though. It had a look in its eyes. Even through the sedatives it pleaded. Perhaps pleaded wasn’t the right word. This was not a weak look, not a poor, pitiful begging look, but a “let me go, you fucking bitch” kind of look.

Delayna snapped its neck and threw it onto the pile.

At that first meeting with the director, he had grabbed her hands. “You have gorgeous hands. And strong forearms. Sturdy. This will do.” He had asked her to get acrylic nails, silver and square-tipped, and she had done so on his dime. Not something she usually splurged on. Probably never would again.

She snapped her way through numbers four and five and six and seven quickly. She wanted to get in deep fast. She wanted to lose count and lose herself in the process. She wanted to drift away so she would stop thinking about things like, where did the director get all these crows? She imagined the cage man, a pale young preppie, not much older than her nineteen years, running around LA with a little net. Maybe he had laid traps laced with roadkill and shiny objects—tin can lids and diamonds. Maybe the director had a single gleaming diamond that no crow could resist. The crows would fly toward it knowing they would be netted before they could touch it, but willing to take the risk just to get close.

She pushed the question aside, worked into a groove and finally lost count. A crow would be placed in her hands. She would wrap her right hand around the crow’s head completely, covering those eyes and sealing the chomping beak. She would wrap her left hand around the bird’s body, clamping the weakly flapping wings in place. Then she would twist, like opening a bottle of warm beer. Except with that snap.

She couldn’t muffle that snap. It just got louder. It got so loud it seeped into her. It became one with her heartbeat and she panicked thinking that she was snapping her own heart in half. She dropped an unsnapped crow. It landed on her dirty purple sneakers, squirming and flapping impotently.

She looked up. Behind the camera, the director sweated even more than normal. His hand clenched his cock through his black dress slacks. With his other hand, he grabbed the bird and handed it back to Delayna.

The pile of dead birds now stood a couple feet tall and almost as wide. The director turned the camera on it for a moment, giving Delayna a brief respite. She looked around at the gray brick walls of the Burbank warehouse space and wondered what else had taken place here. What else had the director filmed?

Delayna was not in the habit of asking questions. The director had volunteered only one piece of information: “This film, it is going to make some people feel very good, and these people have a difficult time feeling good.”

Delayna had merely nodded. She hadn’t understood at the time, but now, seeing the placement of the director’s hand and the sweat dripping from the old man’s bulbous nose, she got it. It made her sad that there were men who couldn’t find joy inside a woman, or even a man, and this is what it took. Not that she had ever found much joy in sex. She blamed her mother for that, for showing her that whatever mystical power intercourse held was secondary to its monetary value.

So Delayna rarely lusted for sex. When she lusted, she lusted for someone to smile at her as if sex didn’t exist in the universe at all. That was hard to find. Sex seemed to sneak into every smile, with a little glimmer in the eye, a little curve of the lip. But this wasn’t about her. This was about these men. She tried to frame herself as a hero, helping these poor, poor men. That gave her the momentum to snap on as the crows continued to fall into her hands.

She thought about the men and she thought about the money. Sometimes, she wondered if she should just get a real job. She didn’t think she could, even if she tried. At school, she had gotten the grades that people get when they’re not smart. F for failure. She had no legitimate work history. No good employer would want her. Still, she took pride in the fact that she hadn’t stooped as low as her parents. As long as she didn’t, she felt she was doing okay.

She snapped and she snapped until she could feel it in her wrists. Soon they started to snap too, and then there was a chorus of snapping—the vibrant, hard snap of the necks over the more muted, pebbly snaps coming from where her forearms met her hands. She looked down and saw the black feathers stuck between her fingers, under her silver nails. She threw a dead crow onto the pile and stared at her palms. Droplets of blood seeped from where sharp beaks had pierced her skin.

The director slapped a new bird into her open hands. He said, “Five hundred. In the sky, a black cloud. On the ground here, now, a majestic mountain.”

She looked at the mountain of dead birds. Then came the moment that her parents, before they had put bars between themselves and her, had tried to get her to ignore, the moment when she thought of the food and rent money in the bank and then thought of the crows in the sky, soaring, and she wondered if the crows would smell the blood of their brethren on her hands. Would they be scared of her forever? Would they fly away to leave her without a black cloud overhead, with nothing to stop the sun from shining on her shame?

The tears trickling over her cheeks surprised her. They didn’t surprise the director though. With a wave of a hand, he stopped the flow of tranquilized crows.

“Young lady,” he said, his right hand still clamped on his cock. “You’re almost done. You want to be done now. I can see that. But you’re not going to quit, because you don’t quit. You said it yourself when we first spoke. Even still, I want to remind you that you’re doing something meaningful. I also want to remind you that I have an envelope in my pocket that has one thousand dollars in it, for one night of work. And you’re moving fast. Faster than I thought possible. In fact, I’ll offer another five hundred if you slow down for this last hundred or so. You don’t have to, but the offer is there. As well as an offer of future work.”

The old man gestured to continue the crow flow. A bird dropped into Delayna’s hands and felt like it belonged there, a feeling akin to sniffing her own shit and finding it pleasant. She didn’t like the feeling. Still, she tried to twist and snap slower, to turn the precise snaps of the birds’ necks into more of a crunch, then into a grind.

The director moved from behind the camera for a moment, leaving it to roll on its tripod. He attempted to arrange the stack of dead crows into a perfect pyramid. His effort was futile. Every time he got close to perfection, a little black avalanche of dead birds left the heap lopsided.

Nine-hundred and ninety-seven. Another set of eyes dimmed.

Nine-hundred and ninety-eight. Another life extinguished.

MP Johnson is the Wonderland Book Award-winning author of Dungeons & Drag Queens and several other books. Her short fiction has appeared in Year’s Best Hardcore Horror, Dark Discoveries, and many other publications. She has created a variety of zines, including the long running Freak Tension. She is the founder of Weirdpunk Books, a press devoted to merging punk rock and genre fiction. 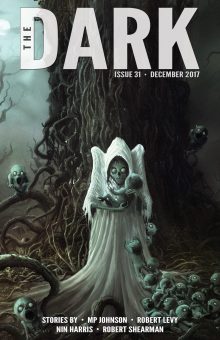