here are some of the things my nails can do:

—push through the backs of the cockroaches that run around my room. They’re crunchy at first and then slip-smooth and soft inside. Their they’re fast but I’m faster

—when I lie really still in the dark I can feel my heartbeat in my nails, from the meat under the base to the sharp throbby tips

My nails are all I have left

Tomorrow they’re going to take them

I live in a room now.

My room is in a house.

My house is somewhere near where the sandyskins live, the daywalking giants, twice my height and two leg-standing. They set a trap in the early time of the morning when the star rises, because they know we don’t like the starshine. I was hungry and the animalparts they dumped into a big gooey mess on the leaves looked so devourable.

So they caught me in the net and dragged me into the house and when they were dragging me to the house they, the men, said nice things about my nails.

“Get a good harvest off them.”

“Never seen a goblin before.”

Ghhrblin, I corrected, making the gut-deep sound in my throat that was the name of my people. This was sillily important to me even while they were dragging me in a net across the forest floor.

One man was taller than the other. Much taller. Both men wore leather hoods. I could see into the eyes of the shorter one; they were an flyer-egg grey, and big, and scared. And familiar.

I made to speak again but the bigger one kicked me and I stopped trying.

When we got to the house, even though I was hurt and scared and crying, I was proud that my nails hadn’t broken.

This is my second day here.

They’re coming for my nails today.

I know it is day because there is a clear square in the room and I can see the forest outside and the sky. I creep around the room on my nails (they grow so fast, wonderfully fast) and look out the square and then creep again and see the fliers flying between the stickly arms of trees and watch the fluffyjumpers jump with their quick, frightened eyes and their furry bodies hiding the warm wet beating things inside them that I starve to eat.

Night comes. The silverstar shines. The forest is made ghost by it. I wonder when they will come. I love my nails so much. I begin to hope.

There are other creatures in the rooms in this house and they kick up shouts and screams and moans and it hurts my head, so I scratch their names onto the wall, the ones I recognize and the ones I make up by the sound of them:

—more Ghhrblins from the sound of it

—Greycapeaters, big people two three times bigger than ghhrblins, taller than the sandyskins and who eat the mushy grey flowers with the caps that grow on the forest floor but I think they’re being hurt because I can hear screaming but the sandyskins don’t know that Greycapeaters can heal any wound

—Some plantchild that I KNOW is a White Screamer it looks like a sandyskin baby but shrieks and shrieks until the sandyskins’ (not mine) ears make red. It hides in the earth but it’s little green hair spikes out and they pick them and—

I run out of wallspace. My script is big and ugly.

As I look at my raggedy nails (they’re as long as my arm now and I am very proud) the door bursts open and the taller sandyskin man comes in shouting, cross.

“Don’t you do that! It damages the nails! Boy, come quick. We have to do it now.”

So the shorter man comes in and his hood is off and he is… oh he is strange looking. No hair, like me. Skin so thin you can almost see through it, like you can see through all of mine: the red-carrying vines and the big bluish things inside me that keep me alive. Those big grey eyes. Wide now.

The taller man has a big brush of hair on his face, and the skin is red above it. He holds a pair of cutting-looking devices.

I set up a shrieking so loud it sets us all off: all us houseprisoners. Shriek, shriek, shriek, while the short man holds my legs down (he is stronger than I thought) and the tall man stamps on one of my hands and snicks off the first nail even as I try and rattle my fingerbones and he cuts too deep and my horrid stub starts to bleed! Snick, the next one, snick snick snick, and then he steps on my other hand and does the same.

The small man lets me go and I fold onto the stone ground. Dark-mad, I am. Pained. My finger stubs leak red. I can see the red throb in my naked body, in my legs and arms. My skull feels red.

The tall man gathers my beautiful swordy nails in a bag and throws them at the shorter man. He catches them. Another silly detail: the shorter man wears gloves. I am so sad for myself.

“You might want to take those off when you grind em,” the tall man says. “Nothing like goblin nails to make good memberpowder. The nobles will pay a pretty price to get their flagpoles up.”

I am so sad for my nails.

Here is another thing my nails can do.

In the dark, when the clear square in my room shows the sky but black now, I can feel them grow. The hard tips slide out from the meat of my fingers, and my eyes can see well enough in the night to watch the hardness slide out of me, under the skin. Not all the way. Not as long as they were. But growing.

I’m too pained to sleep so I creep around the room and go back to the clear square in the wall, the view outside. I tap it. My baby nails clink. It pleases me, this sound. I tap it again. It is a delight. I go crazy: tapping away, making noise with my nails.

Then I am tired. Then I sleep.

I hear my tapping in my dreams. I open my eyes. I am still here: dark room, dark house, clear square. Cold hard floor. Not the forest. Not the sweet sightless underground, where home is. I look down at my body and count the red vines inside me, the dark shapes that are my insides.

It is not clear. Someone is there. I see the shadow of it and know: it is the short man. He taps on the square with his fingers—ungloved now.

He taps, faster. Eyeswide-like. I creep over to it and stand, looking into his face.

His gloves had hidden jags of nails, redded around their bases.

Why? I ask in our language, grateful to hear my tongue make it.

He replies, through the clear square. His voice is quiet but I can hear him.

He tells me a story so silly I feel my face turn to fire.

He tells me that he loves this sandyskin, had watched him patrol the forest looking for our people to harvest. He had practiced walking in the day to darken his skin, so that the insides don’t show on him, because the light from the daystar darkens our bodies like the sandyskins. He offered to help him, to stay with him. To be near his great body. So he daywalked and wore gloves and chewed his nails down to look like them.

Then he tells me seeing me had made him realize that he couldn’t do it anymore. Even though he has seen so many of us, this, me, for no-reason, for madness, made him change. I know he’s lying. I know that is because he has seen that all his betrayal had still left him unloved.

I swear, I curse, I rage! Stupid mud-sucking day-fucking sand-skinned clod, woodknot, shitfly! Was it worth it? I ask him, mashing my nails into the clear square, wishing it gone, wishing I could crush his face. Was it?

They’ll never take you back! I scream. I’ll tell them what you did! Crowsturd! Sluglicker!

I throw my words like darts at his retreating back as he disappears into our home, our forest.

I creep around and around the room until my nails crack and ache and then fall down, rage-exhausted.

Something shines on the stone: a silver key shine beneath the wood of the door, slid under. Perhaps he was tapping for me to find it. Perhaps this was his idea of sorrymaking.

Oh. He’ll be sorry he left me this key. He will.

I creep over to it, pick it up.

Tender, for the nails.

I find a new space in the wall and scratch.

Then I creep out of my room, unlocked now, pushed-wood aside nothing more, and I unlock the other rooms, tap-tapping on the wood so the other prisoners know to wake. I creep on my nail tips, face flush to the ground and shitter pointed to the sky, my feet nails still long but my handnails not stilt-like and bowed under my weight when he snicked them off.

I creep through rooms with cup and chests and more strange clear shapes with our nails in them, with greycaps and other things: ears, members, wings, teeth. Our things, they took from us. I creep and I creep until those things are behind me.

I push open the biggest door I can find and there is the forest, my home: silvered now, beating with the sounds of the lives that surround my own. Coolness against me. Sweet-smellingness. I’m about to creep again when I hear a snort, a sound.

I turn on my nails (short though they are they are steady, growing back, already) and pitter-patter back through the rooms with all our parts and see another slab of darkness beyond more standing wood, beyond another door.

I creep slower, to be quiet. Like when I am hunting the fluffyleapers that are always so scared.

There is a bed beyond the door. On the bed is the tall sandyskin: silver hair all over him, all over his thick body. Legs hang like logs over the bed. Arms too. Head back, mouth open, rumbling in sleep. I can’t see inside him—yet. His neck is turned up like a peak of a slope. It moves up and down while he breathes.

I creep closer, on the tips of my nails: all of them. My feet too. He forgot about these. Creeping, creeping towards that mountain-mouth, that furred neck. I creep so close I can see, just a little bit, if I put my eyes very close to his skin: the red vines inside him.

There is another thing my nails can do.

Phoenix Alexander is a queer, Greek-Cypriot writer of science fiction, fantasy and horror. His stories have appeared in F&SF, Beneath Ceaseless Skies, and Black Static, among others. Links to all of his work may be found at www.phoenixalexanderauthor.com, and you can follow him on Twitter @dracopoullos. 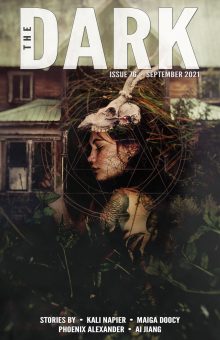