That midsummer’s night, after we four collapsed in fairy sleep beneath boughs and moon, I roused to see a sprite looping through the flowers. Carrying a single seed in his ant-leg fingers, he ducked beneath Hermia’s skirts. She turned once, in dream.

The past is nothing but the shapes and colors that now arise before my mind.

Here’s how I imagine the birth nine months later:

The baby slides out amid blood and night-blue dust. In place of a left hand, the child has a tusk, shiny and sharp.

The midwife stands between Hermia and the flexing child. “The child is a devil,” the midwife says. As she lowers him to meet his reflection in the water basin, I imagine him realizing his brevity.

“No,” says Hermia. “I love him!” She reaches out her arms—I picture them bare, trembling, unbeautiful—and reluctantly the midwife draws the infant back out of the water.

While the midwife angrily washes and gathers, the child places the sharp point of his tusk upon his chest, whispering so that only Hermia can hear. “Non-existence,” he says, “sets a floor beneath suffering. But milk is also good.”

I imagine Lysander’s first encounter with the child:

He bounds into the birth room and lays six wild bluebells on the bedstand. He kisses his damp wife. Instantly, he loves the child; instantly, he feels that he, Lysander, is bare and the child is clothed. Disregarding the child’s one most obvious feature, he touches the child’s belly, his chin, his bald philosophical head. He covers the child’s back with one hand and says, “We will call him Sage. He will hurry to wisdom.”

Gently lifting Sage’s left forearm, Lysander touches the pad of his right ring finger to the tip of the tusk. The tusk pierces Lysander’s finger as though the finger is made of air, not pausing, not pressing, opening up a small spring of blood. Then smoothly, as though expecting exactly this disaster, Lysander shifts the tusk farther from himself and Hermia, while jamming his injured right hand deep into the stack of cloths left by the midwife, who has already departed.

Sage pauses his nursing and says, “The tusk is for me alone. It is my path to non-being.”

Lysander meets Sage’s gaze—should I imagine him as surprised?—and tightens his grip around Sage’s forearm. He aims the tip of the tusk toward the corner of the room, as if it is a musket that might suddenly fire. Hermia, Sage, and Lysander remain still awhile, tempera on a wood panel, mixing their silences until the child falls asleep.

While Sage sleeps on Hermia’s chest, Lysander swaddles the arm large and tight, but the tusk pokes through. Lysander offers Hermia her pewter water cup, and when she declines he swallows the water and inverts the cup over the tusk. The tusk passes through untroubled, leaving a clean hole in the pewter. Lysander grasps Hermia’s hand, kisses her two middle fingers, guides her grip to the correct position on Sage’s arm, then leaves the room and returns with a heavy iron horseshoe. The tusk splits the iron in the same way that light breaks a shadow. Lysander rips and knots some cloths, tying the arm to the child’s side, tusk down, but when he turns away and looks back, the arm has escaped its binding. He tries different knots, but the loops will not stay put. He finds sturdy leather tackle and spins it around Sage’s arm and belly like a double cocoon, but when Sage stretches the leather flexes open, no more confining than bare skin, and drops away.

“Sage must have his tusk free,” Hermia says, “since he is of the forest.”

I picture Lysander standing there in yellow socks, trying to measure the distance between what he had thought fatherhood would be and what it was instead becoming.

When the child was a few days old, Helena and I went to meet him. Helena brought her best steel files. I brought my hatred of fairies.

As Helena broke her files one by one at different angles upon the tusk, Sage seemed to see my gift too, reversing it back upon me. “Memory is an illusion,” he said. “Only the present exists. Nothing endures more than three ticks of a clock; there is no identity over time, nothing to resent, no causation longer than a sentence. There is no victory, no loss.”

I thought of love spells that evaporate in the dry sun, of the brevity of sex, of the permanence of marriage.

“This patch of consciousness,” the child said, “will cease in a moment. Maybe there will be another patch in the future, but it is of no concern to me. I am now weighing up the joys and sufferings of this brief space that is my whole being, and I would choose death rather than allow this one moment to be unpleasant.”

Hermia stroked Sage as though these words were familiar cooing. Lysander rested his hand on Hermia’s stained shoulder, looking at me. My reply would be a test of our truce, the fairy-induced truce in which I was tricked into loving Helena for a day. My mind rose feebly.

“But wouldn’t it be better for a future patch of consciousness to exist,” I said, “who seems to remember having been you, than for no such future patch to exist?”

“Why?” said Sage. “Why bring such a being into the world?”

I hesitated, seeing, as if from within, Helena’s barren, vacant womb.

“Do I owe it something?” said Sage.

Sage’s tusk hovered like a promise, swaying silently closer to his chest, then farther away, while my thoughts scattered and danced, trying new partners.

Hermia and Lysander supplied Sage with limitless honey and baubles, trying to entice every momentary piece of him into choosing continued existence. They took him everywhere he wished and nowhere he didn’t, they pushed no bitter medicine, let him command his schedule, his clothing, his food. When Sage said he preferred suicide to a diaper, they let him defecate on wall and carpet and couch.

Despite their indulgent efforts—or maybe rather because of them—the child had tummyaches. And once, they refused to let him eat Hermia’s golden clasp. When suffering began to bloom on Sage’s face, they seized his arm—Lysander always first, if he was there, Hermia patiently, with the perfect minimum of motion, when Lysander had to be away. Sage would then fight with all his tiny strength to plunge his tusk into his heart, but they pinned him, they held firm and deaf, and the tusk waved harmless while Sage twitched and pleaded. Lysander would then feed Sage opium, and the child would ease into a mellow fog, eyes slowly closing, then sleep.

I seem to recall someone with my name speaking with the child from time to time, probing his philosophy, trying to uncover the flaw in his reasoning. But Sage was always three moves ahead. He stymied me, weaving arguments like a spider.

I could not prove to Sage that he should care about any span longer than his current breath. Instead, proof flowed the other way: I came over to Sage’s view. The imagined past and future govern our minds—my mind too—but it is folly. Every moment a new Demetrius wakes, burdened with a dead man’s plans and memories. Brief spaces of joy should flicker, then choose non-existence rather than lapse into suffering. If all humanity should then cease and only fairies exist, or nothing, that is no concern of ours.

During these arguments, Hermia always lay silent, answering Sage only with some emotion I did not understand. I want to connect this image of her with the image of an earlier Hermia I once desperately desired, but I cannot.

I tried to clarify Sage’s philosophy for Lysander. Lysander handed me my rapier and said, “Then why don’t you use this?”

Lysander found a doctor willing to amputate the arm. I picture Sage convulsing and bleeding and screaming, then going limp and cold.

The next day the arm and tusk grew back, sharp and shiny. I picture a Hermia cradling Sage and telling a Lysander that he is wrong to hate the tusk.

Sage became thin and constipated from opium addiction. His skin became sour and shadowy green, his belly a round tight drum.

Lysander said, “Sage, look what your wisdom has brought you.”

Sage said, “You critique some past child fashioned by your mind. I am complete in this moment—peaceful, unperturbed, enjoying this rattle and blanket that happen to be here. Tomorrow’s imaginary beings have no claim upon my pleasure.”

Helena was weaving a garland of crowflowers for Hermia, who had begun to neglect her appearance, while I sat with the flowery loose end in my hands.

“The rattle and blanket are here because I brought them,” Lysander said.

“You imagine some past Lysander?” said Sage. “Can you show him to me, this being who is you, for whose actions you wish to claim credit?”

Hermia sang to Sage that he would be a sailor, a soldier, a chef, an earl. She saw some figure, I think, in Sage’s brow, which none of the rest of us could see. I seem to recall Lysander looking directly at Hermia, his palms on her right knee—or alternatively, I imagine him facing away, gazing out the window across red blooming gardens—and saying, “Hermia, my love, Sage will never be anything.”

Sage of course will have agreed.

The night sky circled around again to midsummer, and Lysander confessed to me a dream: Sage had become a bumblebee, fluttering out of his hands, and Hermia a nest, and they were high up with stars above and below in all directions of the sphere.

I see myself from the outside, saying nothing in reply, attempting a neutral expression. That man, that man with my name—Sage had already given him all he was capable of receiving through words and failed attempts.

Before me a Hermia wails and brays beneath a long equine Helena face. The Helena glares at me, fixing some supposed crime upon me, while I sit on a hard velveted chair that smells of urine. Late morning shines hot through the window.

Through the odor and noise and heat, I dream that an intestinal cramp has broken Sage’s meadowy bliss. His brow wrinkles; he begins to wriggle and fuss. A patch of a Lysander watches, sad and rigid, clad in ruined silk. I imagine row upon column of hypothetical me, forever baffling their resentment with this vision. I see the child glance at his supposed father; I see him stab his tusk into his heart. Some expression on Sage’s face eludes me. He opens like a rose and floods the soil.

I am tyrant of past and future, which have only the power I give them. I have shaped my victory: Lysander’s image yields now entirely to my brush, scraps of him fleeing equally all directions from Athens, while dry sun sparkles on the sheath of my rapier.

Eric Schwitzgebel is a professor of philosophy at University of California, Riverside. His short fiction has appeared in The Magazine of Fantasy and Science Fiction, Nature, Weird Tales, and elsewhere. His most recent book—non-fiction—is Perplexities of Consciousness, from MIT Press. He blogs about philosophy, psychology, and speculative fiction at The Splintered Mind. 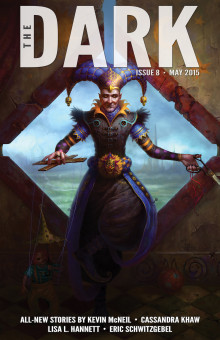