Each month The Dark brings you the best in dark fantasy and horror! Selected by award-winning editors Silvia Moreno-Garcia, Michael Kelly, and Sean Wallace and published by Prime Books, this issue includes two all-new stories and two reprints: 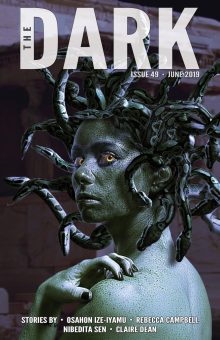 Under the bridge, there’s a veiled woman. She’s said to be merged with the dark, to be the shadow of a human being, or a creature, or some other kind of horrid thing. Over the years, paintings have been rendered to capture her likeness, to describe something—someone to warn the others in the city. Often […]

Jen bought a 1982 Plymouth Horizon for four hundred dollars just before they graduated high school, so if she and Petra wanted to get into town for the Bino’s—open twenty-four hours—to eat fries and pale, oily gravy, or drink the bitter black coffee of three a.m., it was Jen who drove. Petra rode shotgun, watching […]

We Sang You as Ours

The new egg was going to be a boy. Cadence had overheard Mother Reed and Mother Piper saying so in the kitchen, last night, after they were done singing to it. She didn’t know how they could tell—it looked just like her little sisters’ eggs had. Maybe a bit bigger than theirs had been at […]

One step inside and Amy knew there was something she’d forgotten. She heaved her rucksack over the threshold and counted the carrier bags she’d lugged up from the Co-op in the town. Four, which was right. There might not be enough wine, though. With the front door key between her teeth—metallic tang on her tongue—she […] 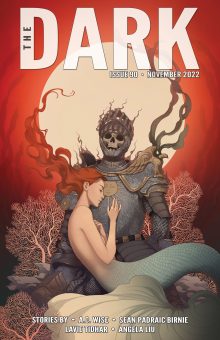