I am not a horrible person, I murmur to myself in the basement at night when my family is at home—half my family. Voices of actors and actresses from a Cantonese drama drift down the stairs, mingling with the words in my head, the ones leaving my lips, as I sit with my legs folded against my chest in darkness. The chair I sit in sways, though I remain still. The only light comes from the computer screen in front of me, flickering as the storm outside batters the electricity lines barely tethered to the streetlights. Tap taptap tap. The wires smack against the branches of nearby trees in desperate need of trimming, but no one does it, and no one files a complaint for someone to come fix it before it becomes an issue either.

I am not a horrible person. My whispers are a little louder this time when Mother’s sick laughter bounces down the steps, disappearing right before it reaches me. Thankfully, my brother’s not home tonight—he always has his computer volume too high, the sound of violent video games penetrating the wall that separates our rooms.

The chill of the basement burns my lungs, but my frozen feet begin to thaw, my earlobes warm, blood rushes down my arms and into the tips of my fingers. There is nothing wrong with the man’s voice, or the words that leave his lips, or the way he looks at my mother with love—sometimes hunger. But he is not Dad. He is not a terrible person. Right. Right? But—

“Elaine.” Mother’s voice snaps me from my frenzy of thoughts and calms me for a moment.

“Could you head out and grab takeout from that restaurant in the plaza across the street?”

It’s a miracle she never remembers the name. The place is the only one she ever orders from. The others are too expensive, she’d say.

The laugher from the living room follows me to the front door. I watch Mother’s and her boyfriend’s shadows—only the top halves; the bottoms obscured by the couch—shuffle against the wall, lit by the TV. I want to laugh with them, too.

Just as I opened the door, the sound of the TV turning off causes me to turn. The filter from the fish tank sputter to a stop, its vibrant white light flickering to darkness. The only light remaining is the yellow glow from the streetlight in front of our house, a slim beam slipping in through the door. A groan from both adults. Creaking follows the cracking of joints and necks, along with the crinkling of once still clothing. Mother must be wearing her only dressy shirt, the mauve one. The boyfriend always wears his white work shirt—I’m convinced he only has the one. There’s a strange sour smell coming from it each time I walk past him.

“Could you also grab some candles?”

There are no issues with the electricity at the superstore in the plaza, but the surrounding restaurants and smaller shops sat like dark arms on both sides of the large illuminated building. It’s too bright. I raise a hand, shielding my eyes as I amble towards the restaurant connected to the superstore. Takeout boxes sit in a plastic bag outside. The owners had given up and headed home early for the day, it seems. I want to lie and say the food isn’t there, to leave the takeout, to go home empty-handed.

I linger by the front door, swinging the takeout like a pendulum. It bangs against my leg. One of the boxes inside pops open, smearing sauce on the plastic. The pungent smell of fish oil wafts across my nose for only a moment before the wind whisks it away. I don’t head back until the food cools. Condensation collects along the inner skin of the bag, drips, pools at the bottom—some of it dilutes the fried rice with the Styrofoam lid having holes poked in them by the restaurant staff.

My phone rings in my pocket.

“What—” My mother was irritated—as usual.

As I walk home, I watch the flap of the open takeout box on top flop up and down. Bits and pieces of carrots, peas, and pork spill over the side. Beneath the rice sat the container with steamed fish still in perfect condition. Don’t waste food. Don’t make a mess. That’s what pigs do. The bag bangs against my knees again.

“It’s cold.” An accusation. Mother stares directly at me as she takes a bite of the food. Her face crinkles, causing faint new wrinkle lines to appear alongside already deepening crevices.

“Now, darling. It’s not her fault,” the boyfriend said.

I look down at my food, stab at a carrot. Why does he defend me? It’s not my fault. I’m not a horrible person.

“Could you throw that out?” The boyfriend points to the fish head, its beady eyes watching me. Its fleshless body floats above the soy sauce.

Mother shrugs and reaches for the takeout box, but I swipe it before her fingers could close around the lid.

“I’ll eat it,” I say. Dad’s words when I was eight, a few months before he left, echoes.

Fisheyes are good for you. Eating them gives you better vision, helps you see better. His eyes had a wild glint as he digs his spoon into the eye socket of the fish, scooping out the small round sphere covered in slimy fluid and dropping it into my bowl. Try it.

My tongue wraps around the eye, the liquid ooze dissolving on my tongue before my teeth digs into the solid, like breaking apart grime that had been packed together. But it only took a moment for the small sphere to disappear. I flipped the head, the remaining eye locks with my own, before I gouge it out with the spoon.

She says it as though it was a bad thing.

“Watch your brother while we’re out,” Mother says. She grabs her counterfeit Coach purse from the coat rake next to the door and pulls on her Louis Vuitton jacket with a VL rather than LV logo.

The dull pulse of video game music thud against the door and wall of Milan’s room upstairs.

“Yes. Moth—” The door slams shut. The shadow of the boyfriend’s arm around Mother’s shoulder minimizes until only the still shadow of the streetlight’s pole remains. The engine rumbles. Rubber against gravel and rubble. Snaps from the broken bodies of severed twigs. Open fires and static from walkie-talkies humming from Milan’s room.

I head to the kitchen, grab dirty scissors that still have bits of raw chicken stuck to the blades, and head for the living room. The usually gentle trickle from the fish tank’s filter sounds more agitating today. I lift the lid, plunge the scissors inside, and create the living whirlwind I left in my mind. The goldfish swim against the currents, their fins futile against turbulent waters, their eyes remain dead, lifeless. Do they feel panic?

The bodies of several fish gravitate towards the middle of the small tornado, golden bodies slamming against one another, propelling each other in the opposite direction. I stop, leaving the water still churning, the fish still disorientated, bits of chicken now floating among gold. The blades of the scissors unlock between my fingers. I drive it towards the nearest fish, close the metal across the middle of its body before it could slip away. Guts spill. Release of pellets consumed just moments ago when Mother fed the fish instead of Milan and me before she left.

I cradle the head of the largest fish, its body floats with those of its siblings, and head to the kitchen. I pull out the leftovers from the night before: the rice Mother abandoned in the end and the eyeless fish.

Milan always hears everything, even with his game on full blast. The sound of violence stops, leaving a comforting silence. The door to his bedroom opens, slams shut. Heavy steps drag down the stairs. Milan enters the kitchen with lazy eyes, half open, lined with dark petals, and plops down in front of his steaming plate. In the middle of the table sits the fish head, both eyes in place, though the small spheres were sinking into the socket from misfit. Its body was still fleshless from being picked at by the boyfriend yesterday.

“Have a fisheye,” I say, pointing at the eyes I didn’t bother to wash before placing in.

Milan shrugs, his mind no doubt still thinking about his game, wanting to return to it, wanting to get lost in it. I wish I could do the same.

Milan makes a face when the eye meets his tongue but says nothing.

He doesn’t answer, as usual, but nods. I smile in triumph.

“It tastes just like what Dad used to make, doesn’t it?”

“We should get Mother to try it, shouldn’t we?” I ask with a smile.

Milan pauses, spoon halfway to his mouth. He stares—unflinching—then lowers his spoon.

He doesn’t help me with the dishes and heads upstairs when he’s finished. The other eye remains. I flip the fish over so I can see it.

“I made dinner,” I say when Mother finally returns home. She smells of earth and wood, but there is nothing natural about it. The boyfriend reeks of the whiskey Dad used to break out on special occasions.

“Do you want the last eye?” I lift the plate under her nose. Mother frowns, maybe realizing the fish was eyeless last night, but uncertain enough in her hazy mind to be certain she is remembering correctly. “Do you want it?”

“Get that away from me!” Her screech scraps against my eardrums.

Mother throws out a hand, lashing out at the plate. It falls. The ill-fitting eye dislodges from the socket.

Mother’s bare feet meet the body of the fish, bones crunching under her toes. Her mind is subdued enough not to feel the pain, or maybe she doesn’t care.

“She’s had a long day,” the boyfriend says, patting me on the head as he walks by. Why is he nicer than Mother? Why does he remind me of Dad?

When Mother and the boyfriend settle in the living room, I head for the stairs, but Mother’s question stops me.

“Where did the fish go?”

I turn. She squints at the fish tank, then gets up from the couch while the boyfriend remains, scrolling through his phone, uninterested. A scream rips through Mother’s throat, more inhuman than what would have left the fish’s mouths if they could wail. Mother stomps out of the living room and rushes towards me, claws locking around my elbow.

“What happened?” Her voice is muffled by the sound of my blood and heartbeat pounding in my ears. “What—”

I raise a finger, point at the fish on the ground. The single remaining eye, sunken into the bottom of the socket, stares at us both.

“Do you want the last eye?” I ask, lowering my voice to sound more like Dad. “I can make more next time.”

I am not a horrible person, am I?

Ai Jiang is a Chinese-Canadian writer and an immigrant from Fujian. She is a member of HWA, SFWA, and Codex. Her work has appeared or is forthcoming in F&SF, The Dark, PseudoPod, Prairie Fire, Hobart Pulp, The Masters Review—among others. Find her on Twitter (@AiJiang_) and online (aijiang.ca). 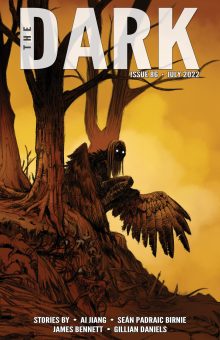