Molecular biologists have added genes to A. aegypti that block the development of flight muscles in female mosquitoes. The females—the biters—don’t survive long. When they emerge from the pupal stage, they sit motionless on the water. They won’t fly, mate, or spread disease.—Bijal P. Trivedi, Scientific American

Nothing on the island was wasted, not even the dead. When a body had grown too weak to sustain itself, it was brought to the Shipmaker’s hut and stretched out on a dark oak table. The Shipmaker would take her knife and bury it in the paunch of the dead’s neck, separating the skin from fascia, rolling it down over the clavicle, the shoulder blades, and the protruding bones where the wings were supposed to grow.

The skin would be handed over to the tanner to make aprons or sails. The bones would be collected and bleached, perhaps to build a new hut or carved for spoons and knives. What was made of the meat, the organs and viscera, the myriad of wet things still full of salt and longing, depended on the need of the island and its inhabitants. Some of it went to livestock, or to bait wells, but more often than not it was gathered and buried in the gardens for the earth to reclaim as its own.

Nothing on the island was wasted, not even the dead. When a body was brought to the Shipmaker’s hut, she laid it out on a white sheet and dragged it into the garden so that it might feel the sun on its face and the snails and other kindred which crawled up and down its legs.

Eventually the body receded like the tide and then the Shipmaker began the real work. For days and nights and weeks and months she flogged the body with a long broom made of bone and silk. She pressed the abdominal segments into the earth, kneading them like dough. When she was finished, what remained of the dead was gathered in a small bowl and mixed with water and flour and baked into a small, hard cake. Other women would come. They would eat the cake and from this they would know the time and the day to plant the harvest, to make love, to prepare for storms. Some dead spoke more loudly than others. Some dead were quiet, giving barely a whisper of the turning of the seasons and the women would sit in each other’s company listening to the sea.

Nothing on the island was wasted, not even the dead. Because life moved so quickly, it was up to the Shipmaker to comb the beaches and little huts each day to see if any had passed on in the night. Sometimes she was not fast enough to see the body, only the indentation where one had been, and a sponginess to the floor as it absorbed the skeleton. If she were not too late, the Shipmaker could find a small fibrous husk, no larger than a bean, where the heart had been. She’d slide it into her pocket and continue on her route, though rarely was there any more than one in a day. By the time she returned home, the heart would have turned to stone or paper or perhaps grown into a ripe fruit. Holding it in her palm she thought she could interpret the reasons for its turning. It was a game she played with herself: this woman was most like a tree, and that is why her heart is a small, scuttling beetle.

Once, many centuries ago, the Shipmaker’s mother’s heart had dissolved into water, a small handful which the Shipmaker offered up to the creeping vine outside her window. It died too, a few days later.

Children came to the island, but the Shipmaker did not know where they came from. They appeared on the beach in small, hard eggs. Some hatched, some didn’t. The boy children stayed long enough to learn to swim before heading back out to sea. The girl children adopted mothers and learned to forget their brittle wings which drooped, then faded and turned to dust.

The Shipmaker had none to call sister or cousin or aunt or daughter. She took in the dead and disposed of them. She ate simply: vegetables from her garden and fish and bread and fruit according to what the other women gave her. Sometimes she called these women by the wrong names, but they took no offense. “The Shipmaker is old,” they said, “and has seen us all from the day we were a tiny fleck on the sea, and will be with us at the end. Yet her eyes are weak and her ears are bad.”

The Shipmaker would nod in agreement and knock over a small, empty glass for good effect. She pretended not to hear the children when they called out to her, and took her time when stepping over shells and rocks on her morning walk. Sometimes she dreamed what shape these children would later take, what made their hearts and what would unmake their bones. Sometime she dreamed of plunging a knife into her own chest, ripping out her heart as it beat and folding it as quickly and as deftly as she could into a small, red flecked ship and setting it onto the wave. She dreamed of other islands filled with unknown bodies.

She dreamed of failure, of ignorance, of waste, and the beauty which lay beyond.

Helena Bell lives in Raleigh, NC where she is an MFA candidate in Fiction at NC State University. Her work has appeared in Clarkesworld, The Indiana Review, and Electric Velocipede. 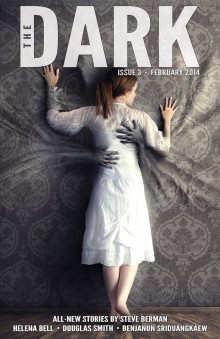