The Body is Concentrated Ground

When Hettie exploded, it was an experience.

The first time she blew up I was unprepared. She had been withdrawn all morning and the evening before. As her face changed through its colors—rust, then red, then a blood-bruise color we called more-low in a play on domestic wine and the sad sacks who drink it—I tended to her with looks.

At eight sharp, I glanced across the downstairs study with concern. We were home-schooled, by which I mean that House Creosote dictated all our lessons room by room. In the bedrooms, we learned bedroom things; in the kitchen, we learned knives. By eleven, we had translated ourselves to the indoor pool, and my tone had grown stern. You cannot tell someone straight out, least of all your sister, to cease despairing, but with your eyes you can imply it. That’s what I tried with glances through the chlorinated air: “Please be better, Hettie. Please be well.” No message is less welcomed by the chronic.

She performed the survival bob for forty-seven minutes, avoiding me.

Yes, Hettie held her breath against my eyes. She held her breath until it became a bomb inside her, baked by her desire for release until it was ready for detonation. By three o’clock we had dressed and dried and moved to the formal dining room for lessons on tea. On the impressionists, poison, and what it feels like just below the skin when you are being lied to. The curtains there were organdy.

An unexpectedly exploded girl’s colors are gruesome. There is pink, but it is not the pink of satin shoe or grow-grain ribbon or petit four. Hettie’s insides glistened the near-fire colors of sunset, but upon their new exposure to the air, they immediately began to darken.

One might argue that the bits of meat strewn on upholstered chair and rug and mahogany were Hettie-colored. That the sounds just before and as she burst were Hettie sounds. But what could not be called Hettie-esque, not by any stretch of my imagination, was the alien fragmentation of her form. Our form. The pieces of Hettie left after Hettie’s explosion were not Hettie-shaped, not Hettie-like in any way at all.

The pieces of Hettie looked like pulled pork, though I had never eaten that, except the one time mother absconded with us to a diner when we were barely five. We would never have eaten such a thing as that. Normally Hettie was très composed.

If it was a shock, her newly shredded style, it was also an illusion. It would not last.

I went to bed soon after she came out of herself—a bit forlorn. I imagined the mess would be too much for even House Creosote. I needn’t have worried.

By dawn of the next day, a Wednesday, Hettie had recoagulated and was the better for it. And our House was fine, every molecule reabsorbed into Hettie, subverting any need to rehire the help.

I think it was probably the ease of reassembly that made it possible for Hettie to fall into the habit. If her explosions elicited in her the most minor hangover, if they required the discovery of the means by which one scours a hardwood floor, if they made the House even slightly unhappy—I think perhaps the once would have been it.

Self-detonation is a strange addiction to be sure, but our ancestors had stranger. Uncle Fadely had a pressing need for red beetle snuff. The crimson powder of rare pulverized insects from South America he mixed with a strain of bitter tobacco grown on his father’s own North Carolina plantation. Mother, when she was alive, said that she was never certain whether her brother-in-law’s mild hallucinations were caused by the concoction or kept in check by it. He snorted, by admittedly hyberbolic family accounts, a minimum of three tablespoons a day.

Hettie started as one tends to start, in a few experimental bouts. She blew up first in June of our seventeenth year—the second time was the end of October. The third time was at the holidays, and I couldn’t blame her for seeking relief then.

Our solicitor, Herr Njoku (he was of German/Nigerian extraction) told us it was past time to sell. He told us this on Christmas morning. Hettie and I didn’t celebrate, but House Creosote wanted, on that day, to fix us a large brunch it would have been a shame to waste, so we invited a few acquaintances to join us—culling them from their own families. Perhaps this explains our lawyer’s indelicate mood. Who knows? There were appearances we had been trained to keep up.

The House was discomfited. The Persian carpet beneath us fairly bristled at the suggestion. Creosote wouldn’t be sold. I told Herr Njoku he must find some other way, but I was well aware our fortune was dwindling. Hettie and I took no interest in such matters, and neither had the previous generation, except for our father’s single disastrous investment in solar, followed not long after by the murder-suicide. Mother was his partner in all things, except on that night she had gotten as far as the diner.

Our father should have left it of course. Money begets itself with the most modest help, but our dear departeds had a habit of not caring enough to insure that help was adequate. Njoku was a mediocre advocate and said the upkeep on the grounds alone was a drain that would sink our ship. His malaphors tended toward the poetic. Hettie and I knew that the poor state of the gardens was a result of the House and grounds being at odds for some time. We didn’t say so. Continuing with his common unpleasantness, Njuko started questioning our decision to let the house staff go. “It is odd to me,” our solicitor said, twisting his head around like a serpent tasting air, “how well you’ve been able to keep up with things.” Hettie was by then visibly upset. She stopped breathing, and I tried to prepare our other guest, Julia. “Please,” I said, “Hettie is about to get flesh all over your terrible dress, try not to be alarmed.”

The facial configurations that communicate confusion are individual but recognizable. Blank stares are common, as is squinting, and a single-shaking of the head—as if trying to dissuade a moth from landing on the brow. Lucky for us, I was able to usher Hettie into the anteroom to the parlor before she became like a lightless firework. The sound of a human coming suddenly, magnificently apart is more subdued than one might imagine, a wet popping—like loud champagne. A sound more in keeping with Hettie’s more lighthearted moments, before they became so rare.

The House quickly prepared mimosas, and I left my silks—spattered with Hettie—in the anteroom and went upstairs to reclothe myself in Hettie’s matching set before bringing out the tray from the kitchen. I told our two guests she had been struck down by a sudden migraine. Julia Rydell, our parents’ closest approximation to a friend, our godmother, and what one might call an “advisor” had we not the House on which to rely, thought we ought to summon a doctor. I insisted not, at which point she pulled out a small tin to retrieve a morphine pill. I shushed her with my hand. “We’ve dealt with this before. Hettie will be herself come morning.” Brunch went as well as could be expected without my sister’s amicably brooding presence, and I wished them good night around quarter past four. The light was already growing faint.

When I returned to the bloody room, Hettie was half-there. Following the previous two incidents, I had not remained to witness the regathering. I had been taxed. It takes some getting used to, being in the presence of the violent disarticulation of your best beloved. The reverse process proved as fascinating as it was different in quality from its preceding event. I pulled in a chair from the dining room and was instantly, irrevocably beguiled.

The red bits floated up all around the red room, some hanging, some drifting toward the unfinished sketch of her body. When they reached her orbit they spiraled in as if on minor currents, seeking their places in Hettie’s great scheme—the reef of her. Mother had loved nature documentaries. How alive my sister was! How full of promise!

It was nearly ten when she was completed. And so much better for it. “We won’t have to sell, will we, Felice?” were her first new words, if one ignored a few garbled attempts before the tube of her throat was re-established.

“We will never leave,” I assured her. And House Creosote agreed, sighing deeply in its foundation.

We lived there together for the next many years, seeing less and less of Julia and Njoku, until we saw them not at all. I assume that they have died, as people do. Hettie’s reliance on willful disassembly during the same period grew more frequent and required my near constant attention. It has become essential that I watch. At her peak, she was using every other day, but eventually, upon my insistence and exhaustion, she settled into a more manageable weekly dosing.

Every Sunday evening for the last two decades, she has blown up, only to start the week in beauty. She is beauty. There is a certain rejuvenation that comes from these events. She ages. We age. But she has this unparalleled gift: a physical tabula rasa. She glows in the aftermath of her resolution like the tail of a comet. Her moods are better regulated afterwards. Or were. In these past few months I think she has finally grown weary of reinvention. She fears finitude and has said as much. “I can be solved only so many ways.”

The House itself grows increasingly dreary during the weekend, a time-construct defined only by our habit of waiting, and by the arbitrary calendar—formed for others, obeyed by others. And ultimately, by us as well. The House and I nearly cease our own respiration in the hours leading up to Hettie’s rebirths. Monday is our best day. A respite from her diminishment. A day of gratitude and admiration for her fluctuations, however long they may last.

Over the years, Hettie has become House Creosote’s major concern as well as my own, and small things have begun to decay: I have glimpsed rot under the upper eaves, the smell of mold sometimes drifts up from the wine cellar, dust has settled in. Who is to blame? We can only do what is possible. The pool grew green sometime in our fiftieth year, so we shut those doors, though it is hard to remember in which season, what with us rarely venturing beyond the front hall. By that time, Hettie and I were not receiving any visitors. Life went on, goes on, as do our daily lessons from the House and from books we discovered in a private library Mother hid behind a false wall beneath the stair—mysteries and thrillers and a few volumes of lowbrow erotica. I occasionally climb with difficulty to the third floor, the old maid’s quarters, to listen to a small radio for which the House provides constant battery.

Recently, I have learned that it is possible to absorb one’s twin while inside the womb.

This Sunday, which will be Hettie’s and my eighty-eighth birthday, I will lie down beside her on her bed, well within her blast radius. We are agreed.

By the following morning, our dear House will have seen me home. I do not know whether I can—in this manner—reinvigorate the poetry that is Hettie, but I anticipate a profound sense of belonging. 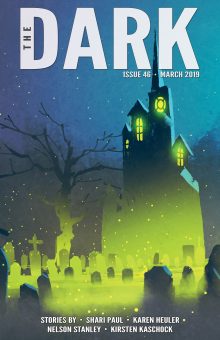