And A Piece of Coal Where Her Heart Once Beat

Nothing lasts forever. Not Christmas, with its bright lights and spangled promises of good things that never quite come to pass. Not the dreams of magic that it conjures for children everywhere. Not even Krampus, with his sack of coal and his cold heart. Even villains grow old and achy, age softening their sharp edges, allowing things akin to nostalgia and loneliness to seep to the surface.

It made him wish that the mountain had not been hollowed out, like a sponge, full of tunnels and caves and oubliettes, designed to deter or trap any intruders. Designed to keep Krampus hidden, deep inside the mountain, where he could keep his lists of naughty children and plan his cruelty for the year to come. For if there was someone to seek him, they would never, ever find their way.

And if they did, what would they find? he asked himself, stroking his whitened beard and staring into the fire. Nothing but a sad old bovine, hiding himself away from the world. Disgust welled up inside him like bile. How was it that age had snuck up on him? He could not remember ever having been anything like a child . . . Then again, his type—oh, yes, there were others like him, though they went by different names, in different forms—lived a long, long time.

But nothing lasts forever. Castles crumble, wishes fade, even the oldest of the trees in the woods on the mountain above die after thousands of years.

“Then you must make it last!” he said to himself, rising from his chair and ignoring the knotty pains in his back. He took to pondering how he might do so while wandering the passages that curled around on themselves. Occasionally he stumbled across the remains of young daemons who liked to climb up from the deep fire pits to try to fight him. Even they could not find their way out into the world or back to Hell, once they were lost in Krampus’s labyrinth.

He also stumbled on other things, too, the sort that he had thought hidden for all time. Long-lost memories of a young boy, trying desperately hard to hide his hoofed feet from the other boys in the town. A broken silver fob-watch, its face studded with tiny rubies like drops of blood, lid carved with words in an old language he could not understand. And, in the darkest, farthest corner, where he could not remember having been before, a cloche jar that covered something shrivelled and desiccated. In the candlelight, he thought it looked a bit like a heart. As the flame flickered, he could have sworn that it gave a one feeble beat, then another.

Without knowing why, he lifted the glass gently and picked up the heart. It was warm. He lifted it to his lips, and swallowed it whole. A baby’s cry, thin and hollow, echoed through the hallway, dying away as a bitter wind blew through behind it. And, with that, Krampus knew what he must do—how he could indeed make his story go on forever. He walked through the tunnels, up the thousands of ancient stone steps, exiting through the huge fireplace of the abandoned castle topping the mountain in which he lived. Slowly, as the snow fell and winter bit the air with its sharp teeth, he set out, stumping across the late winter lands in search of his successor.

Hundreds of miles away, the girl Lulah, only ten years old and small for her age at that, set out in her mother’s only winter coat and shoes stolen from the general store in the raggedy strip of shops that had once been a village. She would need them, she knew, but it also didn’t hurt to have added another crime to her short list. Theft, though, was a small thing compared to what she had come to think of as the necessary mischief. Lulah had had to do something impressive to show Krampus she was capable of more than plain disobedience.

The stories her mother had told her about him were supposed to scare her, she knew. Instead, they had left her with a little kernel of hope that warmed her, despite the old shack they called home, the pinching hunger, the grey march of poverty. Hope that there was a strange justice at work in the world and that she could use that to her advantage.

Lulah breathed deeply, pushing away the sick feeling twisting inside her as she thought of her mother. The freezing air kissed her cheeks red and the wind, she thought, fair whistled through her bones. But she didn’t look back. Not once.

Lulah and Krampus each walked through the deepest winter, never quite meeting up, although there were near misses in the bare forests, where the only company was the howling of wolves and the thunder of the hooves of wild horses, and in the abandoned village that stood at the juncture of the two frozen rivers. It wasn’t until the springmelt had begun that they met on the Devil’s Bridge, a stone arch that stretched over the still water. Twinned with its reflection, it formed a perfect circle. One through which, it was said, Krampus rode to collect souls.

Lulah and Krampus each stood at either end of the bridge, looking at one another. Both thin, and exhausted, as though winter had eaten them up and left behind husks.

Surely not this one, he thought as the urchin walk towards him, chin held up defiantly.

Though she didn’t show it, Lulah was shaking in her shoes. He was so much bigger than she imagined; though his back was stooped and his fur matted, the huge horns on his head looked sharp enough to cut glass. His hooves clattered on the stone as he walked toward her. They met at the halfway point.

Lulah pointed to the water below. It reflected the trees as they opened up to spring, the curve of the bridge, the swallows darting above. But neither Lulah nor Krampus appeared there. The reflected bridge was empty.

Krampus took a Christmas wish from the string garlanding the mantelpiece. In the firelight, the beads glowed vermillion, emerald, indigo. He rolled it between his gnarled fingers before handing it to Lulah.

The girl smiled at him. “This one will taste like apples,” she said, biting into the scarlet wish. It popped between her teeth, making her skin blush. She had already learnt so much, in the nine short months since Krampus had led her back to the ruined castle, down through the labyrinth, into his lair. It was the only place that had ever felt like home to Lulah.

Krampus smiled, pointing to the Christmas tree hung with glass baubles. The children inside them, made miniature by his magic, cried and shook the glass. Krampus and Lulah laughed.

“You are the naughtiest of them all, Lulah! Daughter of Krampus, who will take children to hell long after I’m gone.”

Krampus hooked his horns under the string, flinging the wishes into the air. They landed on the long table, turning to a feast of blueberries, sugared violets, crispy goose, steaming pudding.

Not quite daughter yet, she thought. Lulah lifted her hands to her head, where the beginnings of her own horns sprouted, glossy and dark. Pity flared inside her. For the children in glass cages. For her parents. Had she truly broken their silly hearts by leaving baby Tom in the woods?

The cold must have made his ending quick. And she had had to be sure, hadn’t she? No ordinary wickedness would have called Krampus to take her away. Her pity faded as she remembered winters with no food, and spindly trees against the snow whispering sorrow, sorrow. Better to let the winter creep through her bones, to freeze away any goodness that could make her weak.

Curving her mouth into a smile, Lulah reached across and tapped one of the glass baubles. Coal showered the little boy inside, until his tears ran black. Krampus lifted her up, and spun her about, almost like a parent would do on Christmas morning. Although no parent dug their claws into the soft flesh of their child’s arms or grinned through sharp yellow teeth. If they had, no child would have remained bright-eyed and giggled back, as Lulah did.

Face to face, each monster and child both.

On cloven hooves, Lulah and Krampus danced in the firelight, delighting in Christmas misery, then ate their feast of stolen wishes. With each bite pieces of Lulah’s heart turned to black, hard coal. For so long as it beat coldly inside her chest, she would scribe her own Krampus tale from the shadowy dreams of a darkling once-child. She would forget that she had been a girl called Lulah, and all that that had cost her. Her reign as Krampus would last forever.

Suzanne J. Willis is a Melbourne, Australia-based writer, a graduate of Clarion South and an Aurealis Awards finalist. Her stories have appeared in anthologies by PS Publishing and Prime Books, and in Mythic Delirium, Lackington’s, and The Dark, among others. Her debut short story collection, Of Starfish Tides and Other Tales, will be released by Trepidatio Publishing in November 2021. Suzanne’s tales are inspired by fairytales, ghost stories and all things strange, and she can be found online at suzannejwillis.webs.com 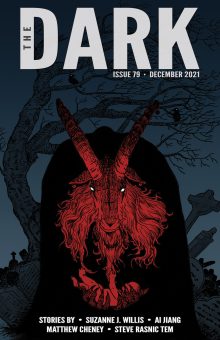