A Resting Place For Dolls

Nydia stood in line at the crepe stand, just outside her office. The sun turned her skin into sweaty syrup, as thick as the caramel sauce that was being poured on the Apple Cinnamon special. Of course, the heat wasn’t the only thing weighing her down.

She had been watching his shows since she was smaller. Or at least, an inch smaller. He had gone around the world and tasted various cuisines, shedding light on eateries meant for locals and the wayward tourist, and taught people that it was okay to step outside the box of their lives. And then he had wrapped a rope around his neck and let his feet leave the ground. The rope must have been scratchy, the type that would give you terrible rashes the next day.

Anything today would be better than the news from yesterday. Getting makeup smeared on the envelopes she had to send out, burning her latest batch of homemade brownies after getting up at seven in the morning to make them. Or worse, failing to get a meringue frosting to solidify. The meringue was her weakness; Chef Lorraine would be disappointed.

Nydia mumbled her order. Then she repeated it. The lady was smiling, as she explained that she was out of Apple Cinnamon but she had Nutella. Nydia said that was fine. They got into a conversation about the crepe batter, as it poured in a spiral on top of the miniature stove.

She couldn’t travel, not like her Anthony. He had money and authority. She was a decent baker, though, when people wanted her to feed them. Her skills also included dollhouse restoration, though it was painstaking work. And she had friends. They were all on her phone.

Nydia kept the crepe wrapped in the perfect pocket of napkin and plate. It would scorch her tongue if she had it now. She walked towards the van that sold cupcakes out of a little window. It was a bright white and offered special Cookie Monster oreo batches.

Her phone beeped. There were ten people in front of her, most wearing business suits and heels. She opened the app, relieved to have the company WiFi for these little pressures.

Mack: Did you hear about Anthony?

NydiaIsHere: I heard. Are you guys okay?

NydiaIsHere: Patient, could you change your name back? Normally I’m fine with you impersonating Mack but it’s hard for me to know who’s who.

NydiaIsHere: I just want to say I love you all.

Mack: You know we appreciate that. But you also need to take care of yourself, hon.

NydiaIsHere: Peach soda and crepes should do the trick.

NydiaIsHere: How can someone just do that?

PatientSnake: Take care of yourself? It’s not too hard, as long as you have organization.

NydiaIsHere: Hang themselves in a hotel room. He was filming a show. The guy has a kid and a multimillion career.

Mack: Lots of people have suicidal thoughts, or reach a breaking point. You’ve talked down people from a ledge.

NydiaIsHere: This is different though. He wasn’t alone. Why didn’t he reach out? Or why didn’t anyone realize in time?

Mack: Maybe he was good at hiding the signs.

NydiaIsHere: I hope none of you ever think about it, about dying.

PatientSnake: Sometimes I wish I was dead. But I wouldn’t do anything.

Mack: Had to drop out of medical school when I was suicidal. Now I’m fine, with a job I like and a more balanced routine.

Mack: I have strategies for keeping dark thoughts away. You can’t exactly make them vanish.

Nydia stared at her phone. The words flashed in white. A pencil poked her in the back.

“The line moved,” someone said behind her, wearing a pinstriped suit. “Do you mind?”

“No, sorry.” Nydia picked up the pace. There was a large gap indeed, and one person in front of her. She could read more specials on the chalkboard; if you bought two cupcakes, you got one free.

She could also see a Big Bird Cupcake, with his trademark beak and striped legs. There had been a Sesame Street episode that talked about death; it aired before she was born. It explained to everyone that death means that you are never coming back, and people will miss you. Big Bird was crying, even though puppets didn’t have tear ducts.

“I’ll have two each of Big Bird and Cookie Monster,” she said.

The woman in the van packed up all four in a cupcake box. Her hands were full, so she couldn’t pick up her phone. Good.

The room that held her dollhouse work smelled of wood polish and dish soap. Nydia always wore gloves, so her touch didn’t transfer body oil to the surfaces. Her earbuds throbbed with a new podcast episode, Panela Tackles Life. She always failed to empty her phone of podcasts.

Nydia had inherited many things: tiny aquamarines nested in her mother’s jewel box, a dollhouse from her grandmother, and this rental house from her cousin. As the landlord, he went on easy on her when it came to the rent and quirks.

“The worst part about death is that we ultimately don’t know what happens,” Host Pamela was saying in her ear. “Only flashing lights, and you could see fire, but no one comes back and talks about a heaven or a hell.”

Nydia’s hands were shaking. She thought of Mack, alone in an apartment, waiting for the dark thoughts. Or PatientSnake, coming home from a dish-washing shift to see someone siphoning gas from the family car. Many online friends, tethered to life with little things. All it would take is one snip, and it would be done.

Her grandmother always would take a doll that she had made, or purchased from an auction and restored to a pristine condition. She would have cakes as well, and she constantly smelled of fresh vanilla beans. Her grandmother had gardens covered in netting, to protect them from insects that would suck out their lifeblood. Or life juices. Plants didn’t have blood.

This dollhouse just needed some paint; this client was often reasonable. She also paid on time and took good care of her dolls. Nydia finished rapidly. Stroke forward, stroke backward.

She looked around the room, and her eyes fell on the other house that her grandmother had left her. It was a three-story pink mansion, with squeaky hinges. The windows had a thick glaze. When the mansion opened, it showed several palm-sized dolls, sitting in chairs. They couldn’t bend, or be changed out of their petticoats or lady hats. Her grandmother explained they were too old to bend, like ladies at the bingo club.

Her grandmother’s dollhouse also had a balcony. A single doll sat in a rocking chair, with corn husk hair, pinched lips, and a brown dress. The chair started to rock. Creaks filled the empty room.

Time for tea and cake, it seemed to say with each creak. No sugar, bread and butter on the side.

Tea and cake, Nydia thought. Made with love, and fresh vanilla bean.

Nydia considered her grandmother’s cake: warm, crumbly, and filled with a rock-hard caramel. It always made her feel better, and then her grandmother would have a new doll for her dollhouse. She still had the recipe, folded up within the old dollhouse.

“Well,’“ she said, paint drying on her hands. Nydia rubbed at it absentmindedly. Then she slid her chair over to where the dollhouse was; her fingers undid the latch. The recipe was on the first floor, crinkled and dogeared.

Silence. The rocking had stopped. The figure stared back at her, with painted eyes.

You know what to do, it seemed to say.

“I do,” Nydia responded. She studied the paper, and made a mental note to copy the recipe. This paper wouldn’t last forever.

Vanilla, sugar, butter, a dash of cinnamon. Seemed simple enough. The meringue would be hard. Why couldn’t she do meringue?

Standing in line felt better this time around. This one came with a food truck festival. Nydia was holding a plastic bag that bumped against her leg. She ignored it.

Again with the buzzing, as if right on time. Nydia fumbled for the phone with her free hand.

PatientSnake: Yo, I tried the cake today!

NydiaIsHere: And what did you think?

NydiaIsHere: It’s my grandmothers’ recipe. She would know how things taste so well. Mack, did you get yours?

IAmMack: Yeah. Not bad, Nyds, especially considering that you had to make mine gluten-free.

IAmMack: YW. Now how about that latest episode of Bad Girls’ Kitchen?

Nydia smiled. Then she marched forward to request an apple cinnamon crepe. This time it was available.

“What’s there in the bag?” the lady asked as she opened a box filled with diced apples and lemon.

“Gifts from my friends,” Nydia said.

The lady nodded wisely. She doled extra caramel over the green apples, which still had cinnamon sugar bubbling on top of it.

“It’s nice that you have friends,” the lady replied. “I’ve lost some of mine.”

Nydia took it with care, so that she wouldn’t burn her fingers. She bit into it, letting the mixture, scorch her tongue. Below, her bag twitched against her leg.

NydiaIsHere: How is your day going?

NydiaIsHere: That’s wonderful to hear! Are you going to take voice lessons again?

NydiaIsHere: That makes me really happy.

“Whenever someone you like feels sad, this cake will make them happy,” her grandmother said. “The sadness leaves you, and you can feel happy again.”

After Nydia had finished her crepe, she went to one of the garbage bins. The little paper plate went, still sticky with caramel. It sailed in, like a grimy Frisbee. Then she stopped to consider. The bag twitched more.

Nydia had stopped eating the cake after her grandmother had died. No matter how much she shoved into her mouth, the sadness remained, swallowing her instead. She had to let bad feelings flow through her until they passed. Her friends didn’t have that luxury, because you didn’t feel anything when dead. You were just bones in a coffin or burned in a fire, having already left the earth.

The bag banged against her knee. Nydia clamped around it with both arms. She had tried to be reasonable. Tea parties, listening to problems that were spun from thin air, and outings. But the situation had exacerbated, and she had the scratches to prove it. That was the problem when you tried to remove someone’s bad feelings from a distance and put them into the cheapest figurines you had. It had to be the meringue.

Inside, dolls writhed within the bag, new ones that she had painted from blank models, and added yarn for hair. One had a fondness for knives and finding sharp ones that belonged to her landlord. Another had been trying to dial the phone with ceramic, stiff fingers. Number three had pulled out the yarn hair and woven it into a noose. The little bits of yourself that you didn’t want, who wished to reunite with your soul. It was unfair.

Nyda considered the dolls. wrapped in duct tape so they couldn’t do more than squirm. None of them would behave or let her friends be happy. They would fight to escape and return. Then her friends would see ropes, imagine nooses, and start weaving the knots. Nydia wouldn’t forgive herself if that happened.

They wedged easily into the garbage bin. Nydia made sure they fit in the slot. The bag stopped twitching.

A 2016 MBA graduate and published author, Priya Sridhar has been writing fantasy and science fiction for fifteen years, and counting. Capstone published the Powered series, and Alban Lake published her works Carousel and Neo-Mecha Mayhem. Priya lives in Miami, Florida with her family. 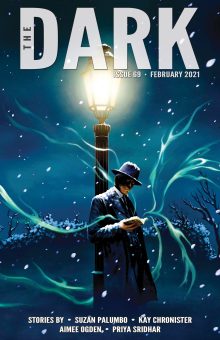