hajimemashit: pleased to meet you.

I found animal tracks in the snow this morning. I don’t know what it is. A bear?

I’m a city person. This whole northern Ontario wilderness is terribly annoying. And Tetsuo is not even here. He had to fly back to Tokyo. Some family problem. He also forgot to load my box of books into the car, so I now have two boxes of Japanese books. Fortunately I packed the records myself.

I can’t read Japanese. I only speak it a bit.

I’m trying to spend more time with the dictionary and the phrase book. Trying to make this time in the middle of nothing count.

I’m going through the inugami book again because it’s mostly pictures and the plot is easy to follow even if you don’t know the words. The engravings tell the story.

Tetsuo’s thesis is on Japanese folklore, so he has a bunch of books about all kinds of funny creatures. The inugami is a dog spirit, bound to a family. To make an inugami you need:

A hole to put the dog into.

Place the dog in the hole, buried up to its neck.

Place dishes with meat around it, but don’t feed the dog.

When the dog is going mad, starved and terrified, cut off his head.

Bury the head under a busy road.

I don’t recall step five. But after that, you have yourself a spirit dog to command.

I’ve never liked dogs. Not since that Doberman bit my right hand back in third grade. I’m a cat person.

We have a fish tank in Toronto. James is sub-letting our apartment and he’s supposed to take care of the fish, but I don’t know how good a job he’s doing. He doesn’t even own a potted plant.

But this is where Tetsuo wanted to be: six months in Nowhere, Ontario, so he could complete his thesis.

Tetsuo makes fun of my Japanese but in all fairness my parents divorced when I was five. My father lives in Vancouver now. I’ve only been once to Japan. I speak French, but can’t trace a kanji to save my life.

Not so weird, though, when you grow up in Toronto by way of Cabbagetown.

Tetsuo’s stories of spirits and ghosts and all kinds of folklore have always seemed very new because of this. Oh, I’d heard a bit about women who are foxes and that story about a snow lady. Snow spirit? Some stuff about the inugami, but Tetsuo knows all about strange critters.

An inugami is a possession spirit. You send it against your enemies. The spirit dogs have an easier time possessing the emotionally unstable.

The inugami enters the victim through the ears and settles into the person’s chest. A person who dies while possessed by an inugami has claw and tooth markings on their body.

The inugami book, the one with the illustrations, begins in winter, with an outside view of a hut. The sky is black, no stars nor moon doting it. There is a woman in the hut. She’s an inugami-mochi, a member of a family that keeps an inugami. You see, an inugami is passed along the bloodline.

The bear or fox or giant raccoon (would a raccoon be out in December?) overturned a garbage can this morning.

A bad connection this morning. The phone rang, but when I picked it up there was only a weird buzzing noise. I could be shopping down Yonge Street right now!

This is my penance. I’m making it up to Tetsuo for last summer, which wasn’t a big deal but got all blown out of proportion and ruined our vacation plans . . . well, I’m trying to be supportive. Supportive girlfriend.

Just discovered that the 1812 Overture I bought myself as an early Christmas present is scratched. Not a small scratch. A huge scratch down the middle of the record. It’s useless. Can’t play it.

The record player is busted. I plugged it in and out of the outlet a dozen times and it did no good. I’ve ended up putting cassettes into the tape deck. How amusing. What’s one supposed to do?

Tetsuo did not phone. The number in Tokyo? Not answering.

It’s not until the middle of the inugami book that anything interesting happens. Turns out that the inugami-mochi families keep their inugami hidden. This family keeps its inugami inside a water jar. That’s the first glimpse you see of the dog. Its floating, like a fetus in a jar. The jar glows green.

Mother phoned. The last person on Earth I want to speak to and she somehow managed to string the numbers together.

No, I can’t go into Toronto for New Year’s.

The spirit dogs of the inugami-mochi families do their bidding, but once in a while they turn on their masters and bite them to death.

That bear is back for sure. There were tracks in the snow today.

hoka no heya e utsuremasu ka?: can I have another room?

I’m sure I had a tape of Erik Satie and I can’t find it.

Mother phoned. Why won’t I drive back to Toronto. I’m waiting for Tetsuo, mother.

That boyfriend of mine.

I’ve got no headaches.

The accident wasn’t a big deal. A thump to the head and it wasn’t even my fault. Drivers in Toronto! But I still get a bit of pain sometimes. Almost nothing these days. A pill here and a pill there fixes it up.

It wasn’t so bad. I got a lot of reading done last year when I was convalescing.

The final illustration in the book shows the girl with her belly gnawed away.

Oh, the bear might be a real problem now. I think I heard it last night, outside, behind the cabin. I have no idea what you are supposed to do in case of bears. I spent my summers in Vancouver, the winters smack in the middle of the city. I went camping twice and hated it.

Like my Japanese, this is one of those deficiencies Tetsuo will never understand.

I hate my handwriting. It’s so childish.

I’m switching to the typewriter because I cut my hand with the potato peeler today. No big deal, but it makes holding a pen a little annoying. Pounding the keys is a lot easier.

I’m being a very good girl and sticking to this diary. Doctor’s orders!

Today I went outside for a walk. You can’t see the little path that goes behind the house now, it’s all covered in snow. And the neighbors cabin seems so far away!

I walked all the way down, to what’s the creek. I think it’s supposed to be a creek. There’s a wooden bridge nearby and I ran across it twice, but the second time I heard something in the bushes and I rushed back home.

Wouldn’t want to be lunch for a bear.

As luck has it, when I was out Tetsuo phoned. He left a short message on the machine.

Love you, he said.

People used to worship the inugami but they outlawed it.

I saw a dog and swerved when I had the accident. But they all blame me for it.

Dear diary: the cassette player is also busted, though it is my fault. I take the blame.

I also take the blame about the phone.

The thing is, I lost my temper. The inugami book I’ve been reading? It’s gone. I can’t find it. Tetsuo needs that book for his thesis and I’ve lost it. First I thought maybe I had taken it with me yesterday when I went for a walk outside, but I hurried back and it wasn’t by the creek. I retraced my steps. Nothing.

Then, guess what? I also couldn’t find the box with the tapes.

You’d think your medication wouldn’t make it hard to remember where you left stuff. But it does. It so does.

I got angry, dear diary. I kicked the cassette player and smashed the phone. The answering machine looks so lonely.

It’s not a bear, by the way. A wolf. I heard it howling last night. When we were kids my brother showed me a piece of paper with the paw prints of animals. Should have paid more attention.

kaite kudasai: please write it down.

When I was a girl the dog bit my hand. I still have the bite mark on my palm. A pale discoloration.

The wolf was in the house, by the way. Don’t know how it got in but it left a mess in the kitchen. It rampaged through the pantry. When I came downstairs the back door was open and there was food everywhere.

Maybe I forgot to close the door? Man, these pills completely dope you out.

Heading into town tomorrow. I was going to go today but I slept in and it was pretty late by the time I woke up. I heard the wolf howling near the window and did not dare to go outside.

The accident was in April, when I was driving back home from the university. I had my music playing in the tape deck. Henryk Gorecki.

That’s what everyone thinks. Even Tetsuo.

I saw a dog and swerved.

I swerved because I was trying to hit it.

chekkuauto shitai no desu ga: when should I check out?

There was no morning today. The clock said nine A.M. but outside the sky was painted black, as if drawn with a marker, and I could not find any stars.

The wolf is a dog.

A dog bit my hand when I was a little girl.

I killed a dog when I was a girl.

There’s a green glow coming from under the door.

I don’t know how to say green in Japanese.

Don’t know how to say dog.

Silvia Moreno-Garcia’s work has appeared in many anthologies, including Imaginarium 2012: The Best Canadian Speculative Writing and Shine: An Anthology of Optimistic Science Fiction. Her first collection, This Strange Way of Dying, is out now, and her debut novel, Signal to Noise, will be released in 2015 by Solaris. 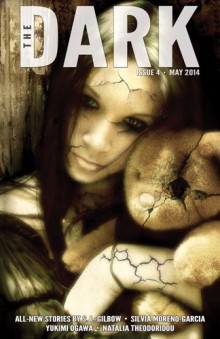